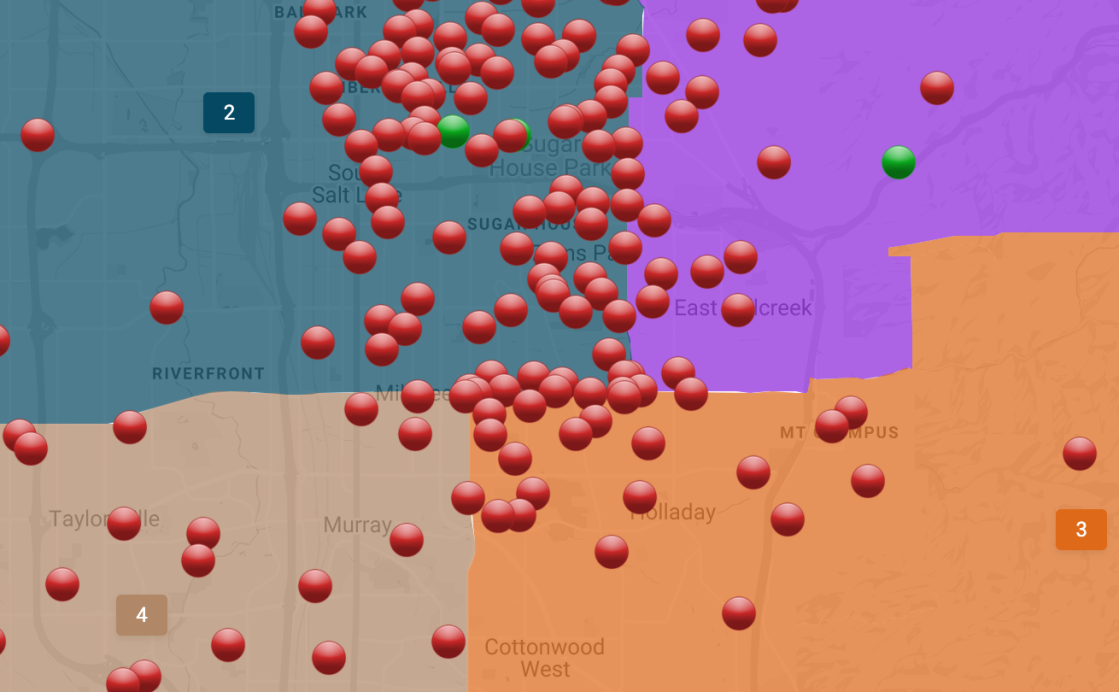 A tour of four districts

I’m just about to lace up my shoes and visit all four proposed congressional districts.

(TL:DR? We voted to have an unbiased group create fair political boundaries based on communities, not voting records. The Utah State Legislature Redistricting Committee opted to make their own maps, which were released yesterday and will be voted on soon. Contact your reps!)

Didn’t we vote to have an independent commission create maps without gerrymandering? We did! And that group worked hard for months to meet objective criteria. They did not use any voter data. They took comments from communities all around the state, and after much public feedback, settled on their three best maps.

You can interact with these and other maps here. I just took screenshots:

On November 1st, the commission publicly presented these maps and their report to the Utah State Legislature. Commenters from across the state and of various parties were, for the most part, enthusiastically supportive of all of these proposed maps, encouraging the legislators to choose one of these. I prefer the maps that split the rural areas of Northern and Southern Utah, then divide up the communities around Salt Lake and Utah counties, roughly following county lines or land features.

The commission did submit a pinwheel style map as well, which give each of our congress reps a mix of rural and urban voters. I don’t know how they decide who to represent, but they probably just go with their personal politics. Still, this pinwheel is much more fair than the old one.

So that was last week. Yesterday the Legislative Redistricting Committee submitted their own map. I dare you to try to get a clear view of a map from their site. You have to select the right one, and the resulting pages won’t tell you what you’re looking at, so don’t open multiple tabs this time. And from there, you can’t simply view an unobstructed map. Here’s the map we’ve been using, alongside the best screenshot I could get of the one the legislature proposed:

I tried the download option and got some cryptic files with extensions I don’t recognize. I’m sure I, a tech geek, could find and install the right software for viewing these, but to me it just feels like they’re trying to keep constituents in the dark.

Updateq: a friend shared an article that explains how to open these files. Lots of work! If you’ve done it and are willing to share the results, messages me!

There are, of course, maps I can check to find out my local districts. Again, they’ve split neighborhoods into chunks. The screenshots of these would be useless, but I’d urge you to view the maps and comments here.

Anyway, I stopped to write this post because it is important to call or contact your reps ASAP since they’re doing this tomorrow. As for me, I’m off to get my steps across this sliced up section of the state.

UPDATE: I checked my fitness tracker. By the time I had reached the most distant district’s boundary, my fitness watch had registered just over 3,500 steps.