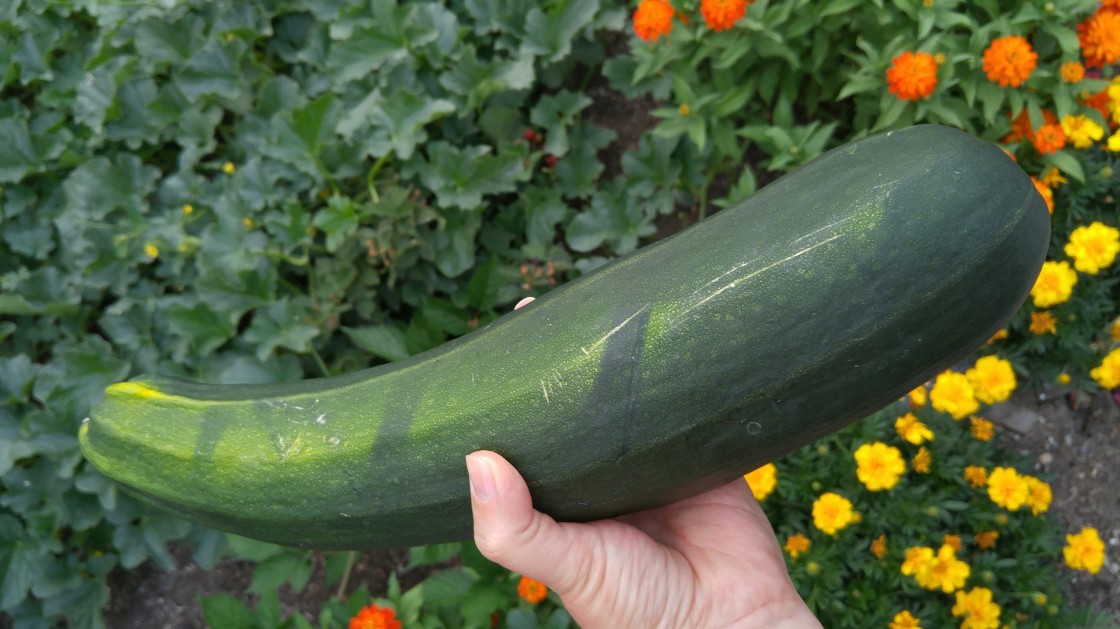 Last night at a tech meetup, my friend and I traded some of our harvests. I ended up with two big zucchini… you know, the kind that stayed on the vine oh… about 10 minutes too long? This is one of my favorite zucchini tricks. We’ll call it Zucchini Monster Soup, named for its green color and the giants that go into it. The Monster part may also get certain picky eaters to try it.

I used a squash that was only about 16″ long tonight, but I’ve made this with HUGE zucchini, too. You would just need to adjust the seasonings — and use a big enough pot 🙂

Directions:
Melt the butter over medium heat. Cut your washed Zucchini into chunks, then cook them in the butter for about 5 minutes. Mince your garlic clove in the meantime.

When the zucchini starts to brown just a little and becomes translucent on the edges, and shrinks in volume a bit, cover it (just barely) with water. Stir in garlic and bullion, then taste the broth and add more bullion if needed. (You’ll need to add salt later.)

Cover and cook on medium heat until the zucchini begins to look soft. Add the herbs and some pepper, and cook a few minutes more. Turn off the heat and add your parmesan.

Then you’ll need to blend it. Use an immersion blender, or blend in batches. My blender (a Blendtec Total Blender with a Wildside jar) was able to contain tonight’s soup, which came in at about 44oz. Just don’t push past the fill line, even if it seems there’s plenty of room…  hot liquids need lots of blending space! Blend until it’s as smooth as you like it. If you like a chunky soup, reserve several large pieces and pulse them in.

Add salt to taste (you’ll need a bit since all that zucchini de-saltified everything), and enjoy!

Tips:
This also works great with other squashes, and even beets.

If you want to be vegan, use olive oil, veggie broth, and skip the cheese.

This is based on a recipe an old neighbor, Ingrid M., gave me. We’ve modified it a bit. She uses onions, cheddar cheese, cream, chicken broth, and a little cinnamon.